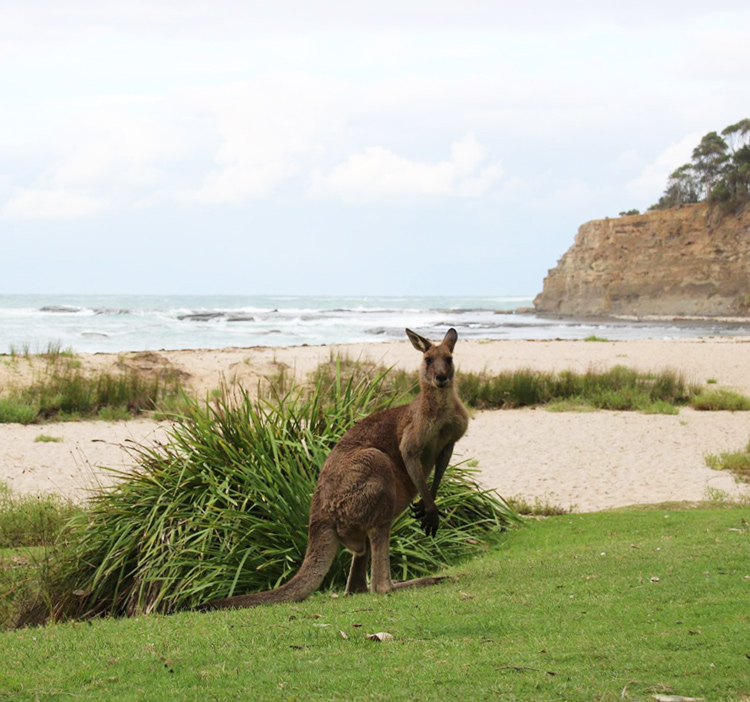 Available From: Brisbane to Sydney | Sydney to Brisbane.
*Pricing is Per Person, based on 2 People travelling. Packages available from Feb – Oct.  Not Available from 14th Dec – 15th Jan.
Enquire about this Package

2-Days Spot X Surf Lessons
Spot X Surf and Stay Coffs Harbour. Learning to surf is a must when you visit Australia. Mojo Surf are the best and we have teamed up with them to bring you this Awesome deal.

Kayaking with dolphins tour Byron Bay
Experience all the fun and adventure of a Cape Byron Kayaks guided tour. Feel the exhilaration as you paddle with dolphins, turtles and whales that frequent the enticing waters of Byron Bay. Whether you are a novice or experienced kayaker, you will love paddling our gorgeous Marine Park! SEEING A DOLPHIN GUARANTEE!

A Coastal Drive from Sydney to Brisbane (or the reverse) in your Awesome Campervan, is one of the most popular and sought-after road trips in Australia. From the famous Opera House, to the Harbour Bridge, some wonderful wines in the Hunter Valley. The scenic drive takes you on an adventure through lush national parks, stunning beaches, rolling green hills of the hinterland, and small yet vibrant off the beaten track towns full of charisma and authentic Australian culture 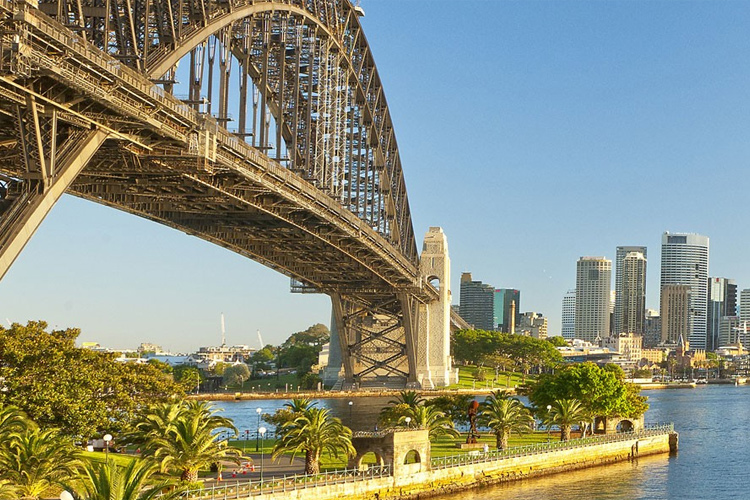 From splendid Sydney Harbour, idyllic beaches and great national parks, to the marvellous creativity of the Sydney Opera House, dazzling entertainment and fascinating heritage, discover all the things to do and see throughout the year.

One of the most beautiful cities in the world, the city fans out from the sparkling harbour to iconic Bondi Beach in the east, golden Palm Beach in the north, the adventure capital in the west and Australia’s oldest national park in the south. The Sydney Opera House is near Circular Quay.

Experience fresh mountain air as you rise above Sydney and enter the spectacular Blue Mountains region. The Blue Mountains is perfect for exploring the best that NSW has to offer. The Three Sisters at Echo Point.

Bushwalking trails at Wentworth Falls, the Ruined Castle, Mount Solitary, and the Kings Tableland. The many breath-taking waterways, rivers and waterfalls. The famous Jenolan Caves, Red hands Cave, Glow Worm Cave and Kings Cave. There is so much to see and do, we recommend at least 2 days.

Nelson Bay is a beautiful coastal resort town, its 18 m above sea-level and 209 km north of Sydney via the Pacific Motorway and Nelson Bay Road.

Nelson Bay is one of the premier locations on the New South Wales coast for dolphin and whale-watching. Humpback whales pass by the coast between September and November headed for the Antarctic and can also be seen heading to the tropics to breed between late May and July. We do suggest catching the Local Ferry across Port Stephens to Tea Gardens. Apart from being a delightful journey it also travels past pods of dolphin who seem to enjoy racing the ferry.

Another recommendation is going to Anna Bay, the huge sand dunes at the northern end of Stockton Beach have become a magnet for enterprising entrepreneurs. For those seeking adventure there are the sand dunes at Anna Bay which can be enjoyed on horseback, Quad bikes or by 4WD.

Located on the Mid North Coast of NSW, boasting 17 gorgeous beaches, a lush hinterland, a diverse variety of attractions including the koala Hospital, Billabong Zoo and river cruises, and camping by the beach. Explore the spectacular coastline on the Port Macquarie Coastal Walk, which meanders into the Sea Acres National Park.

Located halfway between Sydney and Brisbane, the subtropical climate, tranquil rainforests and clean uncrowded beaches of Coffs Harbour (“Coffs” to locals) make it one of the most popular holiday destinations on the New South Wales north coast. With natural attractions, adventure activities and cultural pursuits in equal measure, Coffs Harbour works well for singles, couples and families.

It’s also a good halfway point between Sydney and Brisbane if you’re road tripping along the Pacific Coast. You can’t miss the Big Banana when your there, Adjacent to the highway, this enormous replica of the yellow fruit was Australia’s first “big thing”. The big Banana fun park is home to a water park with four large thrill slides, a toboggan ride, mini gold and a café. Take some time out at the Butterfly House and swim the dolphins and seals at Dolphin Marine Magic.

Spot X Surf and Stay. Learning to surf is a must when you visit Australia. Mojo Surf are the best and we have teamed up with them to bring you this Awesome deal.

2 Day Tour Includes:
2 x Nights powered camp site, 2 x Surf lesson, 2 x breakfast, lunch & dinner. Breakfast starts about 7am and is available until about 9am. Surf lessons start daily around 7:30am and run for 2-3 hours but may vary depending on group sizes. Lunch time is 12pm to 1pm. During the afternoon you can participate in a free activity, relax, lay in the sun or watch a movie in our tv room. Bring the camera as you can get up close and personal. 6pm is dinner time then leads into our camp fire and night time entertainment. Meals included: Breakfast, Lunch, Dinner 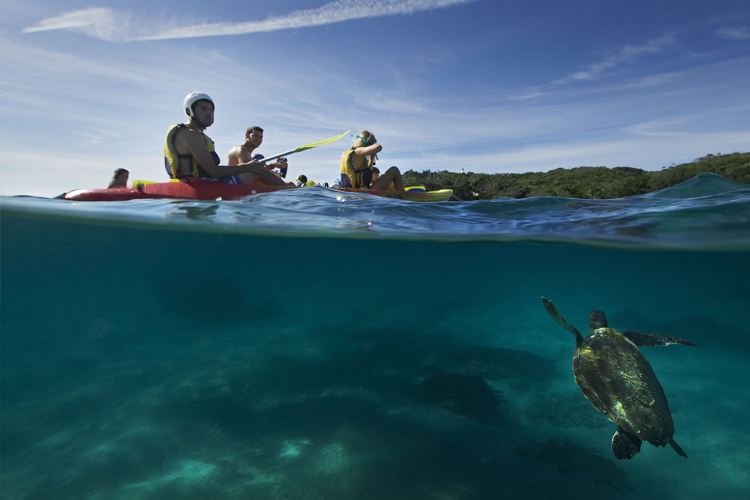 With Stunning natural attractions, Byron Bay is a paradise on the North Coast of NSW, you’ll be captivated by gorgeous beaches, breath-taking bushwalks in hinterland rainforest, spectacular coastal trails and amazing marine life including dolphins, turtles and whales. – we have put together a great tour. A must do.

Kayaking with the Dolphins Tour:
Experience all the fun and adventure of a Cape Byron Kayaks guided tour. Feel the exhilaration as you paddle with dolphins, turtles and whales that frequent the enticing waters of Byron Bay. Whether you are a novice or experienced kayaker, you will love paddling our gorgeous Marine Park! SEEING A DOLPHIN GUARANTEED!

It has set the scene for blockbuster movies and world-class surf events, so it’s no surprise Queensland’s most charismatic city has been drawing visitors for more than 50 years. The Gold Coast is a glitzy strip of high-rise hotels and expansive resorts set along more than a dozen golden sand beaches. There something here for everyone, from dedicated surfers to easy going families a sophisticated foodie. Just 30 minutes from the beach you’ll find a subtropical hinterland dotted with tumbling waterfalls, bushwalking trails and quaint villages.

Hop in the Campervan and, with the coastline in the rear-view mirror, explore an area known as the green lungs of the gold coast, here you’ll discover vineyards, waterfalls and wonders such as Springbrook National Park’s Natural Bridge, Gondawana Rainforests, Lamington Park.

Suggestion of where to stay on the Gold Coast:
Broadwater Tourist Park
169 Marine Parade,
Southport QLD 4215 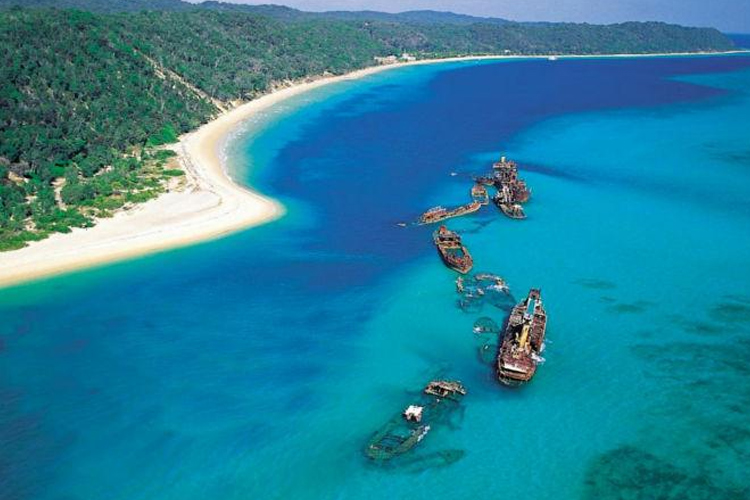 Moreton Island GET WRECKED 1-Day Tour. Daily departures ex Brisbane. Enjoy a beautiful cruise across the magnificent Moreton Bay, Relax on the beach at the Tangalooma Wrecks and have fun in the sun, Enjoy a fully guided snorkeling tour of the Tangalooma Ship. Swim with our special “See Thru” body boards, also available to all snorkelers – perfect for beginners and not so strong swimmers. See turtles, dolphins, coral and thousands of beautiful reef fish.

Discover the hidden underwater wonders of the Tangalooma Wrecks with our fully guided Transparent Kayaks (weather & wind conditions apply). Experience the awesome fish FRENZY in the Transparent Kayaks. Feel the exhilaration of sand tobogganing at speeds of up to 70km/h. Experience a 4WD adventure in our 4WD “Tough Bus” as we travel the rugged 4WD tracks of Moreton Island to “The Desert”. Swim the crystal clear beaches of Tangalooma Beach. $50 levy payable direct to the bus driver in Cash.

Have you been to Lake McKenzie on Fraser Island??

Feeling cute 😍😎 You will find these guys at

Where do you plan on travelling this Easter break?

Did you know Awesome Campers has a depot in #Towns

Did you know that #Uluru is taller than the Eiffel

“A good traveler has no fixed plans and is not i

Show us your Quokka selfie???😍😍 #westernaus

Get an Instant Quote or Book Online! 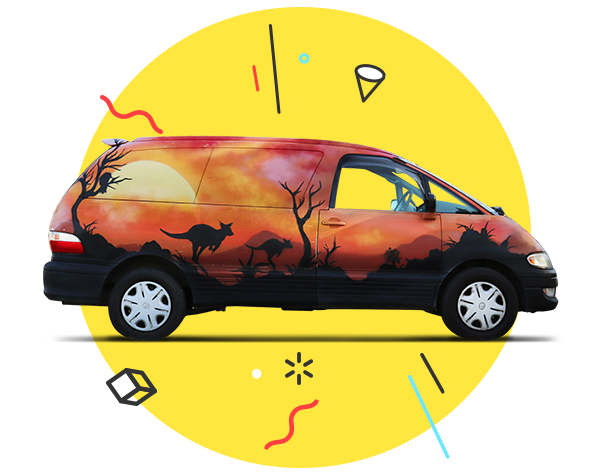 PLUS! Free cancellation 24hrs prior to departure date. Credit card will be charged for full payment 24hrs prior to pickup date. No payment required today to book.

Offer not valid with any discounts or promotions and only applies to bookings made at normal retail rate.